Today I was looking for a lens to put on my MPP 5×4 to shoot a still life in the studio, and I picked out a 150mm f2.8 lens which originally came from a photocopier. The reason I know it’s origins is because about 15 years ago, a slightly eccentric neighbour was breaking up an old photocopier outside my house, so I asked him if he would give me a lens if he found one inside. I got it and I’ve had it sitting in a box of odd lenses and unusual bits of glass since then. Putting it on the camera, I really liked the shallow focus and beautiful soft background, but with a fixed aperture of 2.8, I had to find some way to control the exposure. I decided that some very slow X-Ray film and a diffuser over my tungsten light would give me a manageable exposure which I could time in seconds. I cut some strips of X-Ray film and put them in a dark slide, then did a couple of test shots, one at the exposure I expected and one with more exposure. The second one gave me the kind of negative I was after, so I cut a piece of film to the full 5×4 size and exposed it. I took it into the darkroom and processed it in a tray of paper developer for a minute and a half, gave it a quick stop and fix, then washed it. The negative looked much softer in the background than it looked on the focusing screen (this is something I’ve noticed a lot) and I thought it would make a nice print. Then I remembered that somewhere in my studio I had a 150mm f2.8 projector lens which gave really nice out of focus softness, probably better than this one I’d just shot, so I thought I’d expose a second shot through it and compare them.

I had a faint idea that I’d read somewhere that two lenses with the same focal length and aperture should produce the same depth of field, so I was interested to see if it was so. After shooting and processing the second sheet of film through the projector lens, I could see immediately that they were quite different. The projector lens had a much shallower focus and was far softer in the out of focus areas, so I must have misremembered the thing about comparable focal lengths.
Anyway, I present the two images here for comparison. 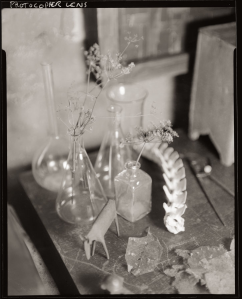 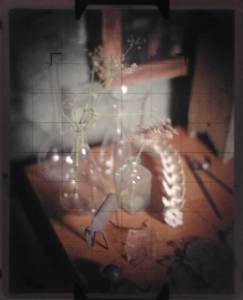 If you have enjoyed this post and the information here and elsewhere on my blog, would you consider a small donation via Ko-fi please? You can send as little as £3.00, or more if you are feeling generous. This money goes towards materials used for the tests and printing for these articles. The link is; Ko-fi.com/andrewsandersonphotography

This makes me want to get my old MPP Mk VIII out of the box and take some still-life.
I only have a 150mm Xenar lens though.

Could you give some advice how to attach the lens to the camera and e.g. which lens to which camera?
Kind regards,
Thomas

I was recently contacted by a writer / photographer in the USA asking if I would like to be included in an article in View Camera Magazine. The article is on photographers using unusual film types, such as duplicating film and X-Ray. I have been shooting on X-Ray film since 1988 and have written a number of articles on the subject, but was surprised and flattered to be asked.

The article is called Alternative Films, Extraordinary results. and is in the July/August 2013 issue.

It is also mentioned on the esc4p.org blog, -resources page

When I need to produce a Gum print or a Cyanotype, I sometimes use large format original negatives. More often than not I use copynegs made from an RC print as this gives me much more control and flexibility.

The first thing I do is make an RC print to the size that I need my final gum print to be, with all the burning in and dodging that the image requires. I then place that face down on a sheet of either; Lith film, Line film, Ortho film, X-ray film or medical Subtraction film (All of these have different properties, ISOs and contrast, so stick to one and understand how to get the best from it. I would suggest using Ilford Ortho film as it is easy to obtain and works really well). This is placed in a contact printing frame or under thick glass and exposed under the enlarger. An exposure is given and the film is developed for around 1 minute in paper developer under red safelight (shorter times give lower contrast, -longer times give more contrast). Stop and fix as usual. A 5 minute wash in running water is adequate for these types of film. Be aware though that x-ray film has a very soft emulsion and is easily damaged.

To begin with, make a few negatives of varying contrast and density, then when you have become more proficient, you will have an idea which kind of negative works best for the process you are using. I prefer to make two negatives when Gum printing, as this gives me better separation in the tones. 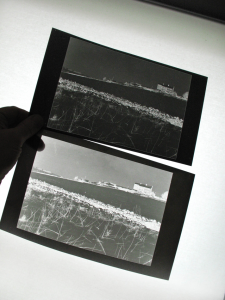 The advantages of this method are that you can make a large negative from any size original, you can get the contrast exactly right for your process and you don’t have to worry about damaging your negative when working with the alt process. I also prefer having a large border around my copy negatives, as this gives a better margin for attaching masking tape when re-aligning for multiple printing.

Thanks for the excellent advice. Before I start, I just want to check that Aristo Ortho Litho film can be developed in normal paper developer. Freestyle suggests “for high contrast negatives, use this film with Arista A&B Lith developer or any standard lith developer.”

Dear Clive, I have not used Arista, but I expect it will behave in a similar manner to the others I have experience of. If you are wanting a longer tonal range, Ilford Multigrade, or similar paper developer will give you this if used at half strength. Experiment with different dev times to get the contrast you require.
Regards, Andrew.